First up is My Secret Garden. Here's what Amy, the artisan responsible for Literary Lacquers, has to say about the polish:


"Glitter topcoat of multicolored matte glitters with a hefty dose of sparkle. This polish is inspired by My Secret Garden by Nancy Friday, published in 1973. This groundbreaking feminist book collected the sexual fantasies of women in a time when women were considered not to do such things. This book, as well as being fabulously sexy, is worth a read just to really understand where women were sexually in the culture as the sexual revolution was changing everything."

This dazzling little cutie is choc full of lavender, goldenrod, cobalt, pink, and grass matte glitters with a touch or sparkle. Here I have it over pastel skittles. The pastels are, as per my usual, by Lime Crime. Sidenote: I cannot freaking get enough of the Lime Crime pastels. They are my go-to polish. They're some of the only polishes that I can wear without glitter on top. Heehee they're that nice!! 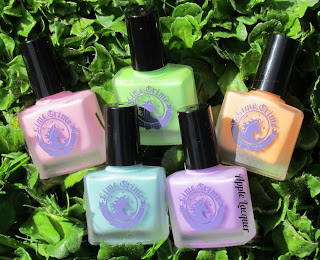 And perfect for the fast-approaching Easter!

Well here it is: My Secret Garden. 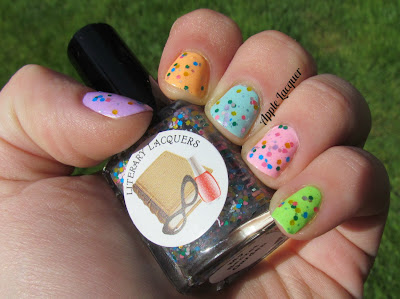 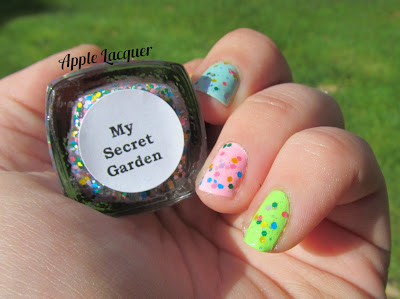 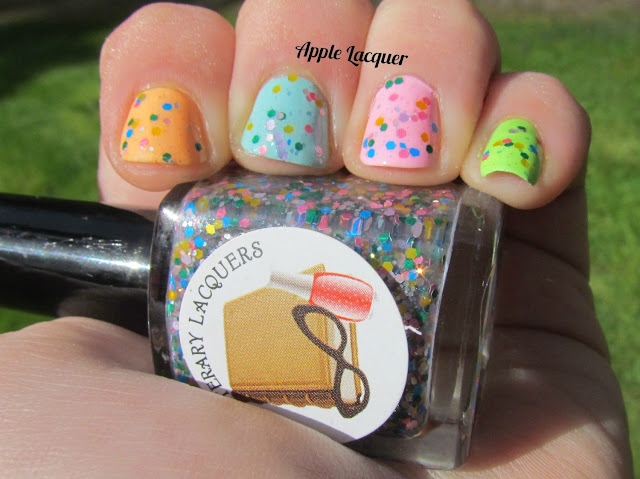 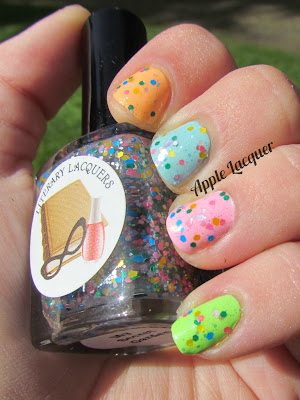 Then I had a crazy idea... LETS MATTIFY THIS. 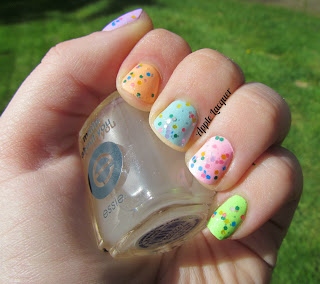 So nice. I needta start matting everything.

"Orange linear holographic - I get full coverage in 2 coats, this is brighter on the nail than in the bottle. This polish is inspired by Delta of Venus by Anais Nin, written in the 1940's and published after the author's death in 1977. The short stories in this collection were commissioned by a mysterious man known only as "The Collector" "

This polish is a lovely hologrpahic polish. As good as a Jade, but maybe even better because you're supporting a made-in-the-USA small business. On the nail this was a little too "autumn" for the beautiful sunshine I have going on right now. Here it is: 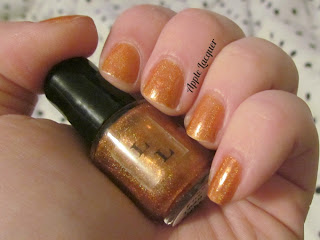 And so I threw some bright yellow under there to cheer it up a bit. Yellow base under middle and pinky. 3 coats on the bare nails, 2 coats over yellow. 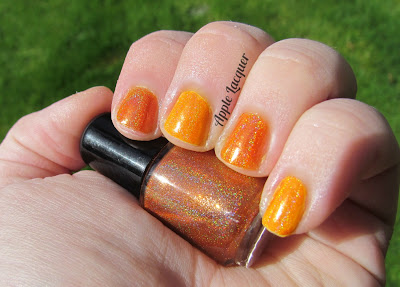 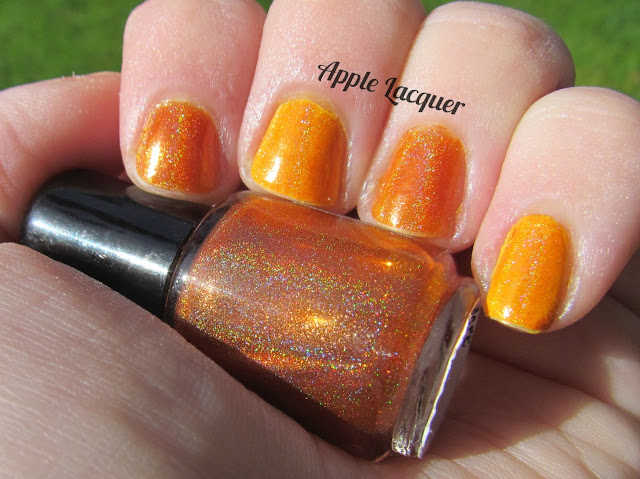 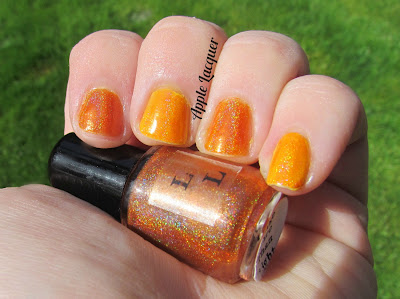 Did you guys miss my outdoor sunshine pics? Because I REALLY REALLY did.

One last one! And it's really pretty. It's called Woman of Pleasure.

"Periwinkle crelly with navy, lavender, matte pink glitters and magenta circle glitter. I get full converage in two coats. This polish was inspired by Fanny Hill: Memoirs of a Woman of Pleasure written by Jon Cleland in 1748 (!!) when it was promptly banned for over 200 years."

This is my first crelly glitter. I haven't really been too excited about this type of polishin the past but hey, throw some circle glitter in and I'm down! Here it is, shown by itself and over Lime Crime's Once in a Blue Mousse. Middle and ring fingers have the Lime Crime base and 2 coats of WOP, the others have 3 coats of WOP. 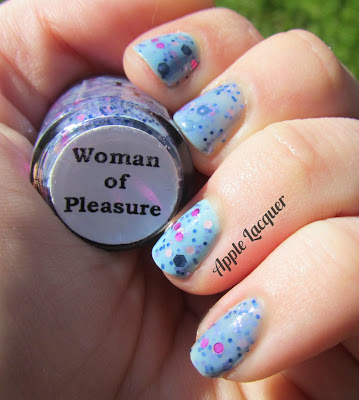 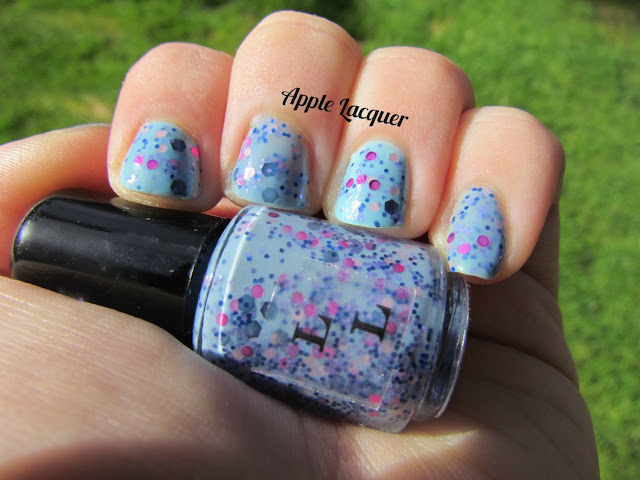 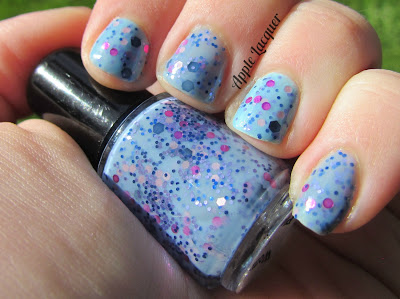 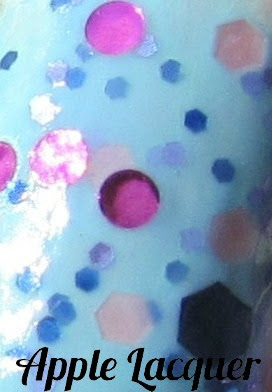 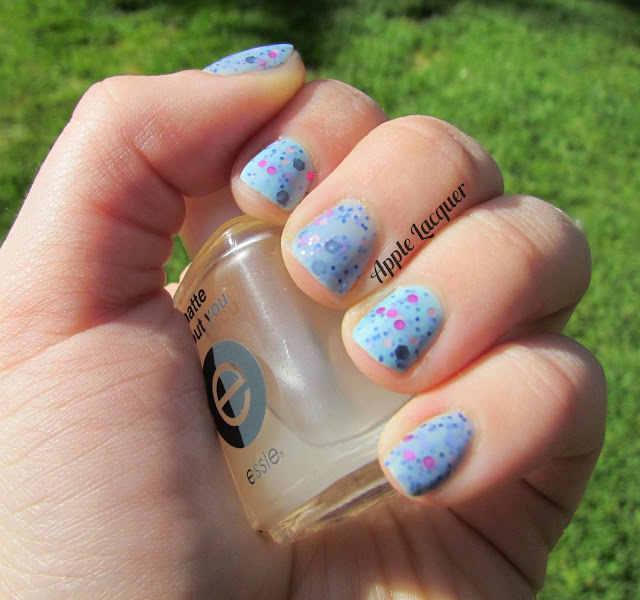 Bottom line, these polishes are great. I love them. Go buy them!
LL's Facebook
LL's Etsy

These polishes were provided to me for review!
at 12:06 PM
Email ThisBlogThis!Share to TwitterShare to FacebookShare to Pinterest
Labels: blue, glitter, holo, indie, literary lacquers, orange, pink, purple, review

Apple Lacquer
Hey polish freaks! You're not alone! I'm freaky too! Now let's paint some nails and anything else we can find.

Beautiful unique makeup, my favorite brand! Check them out, they also have nail polish now!!